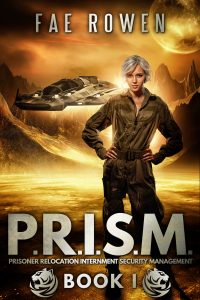 P.R.I.S.M. is a young adult science fiction romance adventure series set far away from a dystopian Earth. Expanding a new capacity for colonizing planets by transportation via cryo-ships, the mega-corporations of Earth began a struggle with Earth’s governments. The corporations won the global civil war, exiling the military and political leaders to Prism, a planet with no resources at the edge of the frontier.  The prisoners were left with sparse building supplies and food to build their own society. Hoping to doom their chances for survival, the corporate leaders also secretly exiled the worst of Earth’s psychopaths.

Twenty-five years later, the prison planet supplies most of Earth’s fuel—translithium crystals the corporations didn’t know existed on the planet. The three groups of prisoner settlers maintain a fragile existence on the planet. All efforts to grow food have failed. There are no animals on Prism. Even with jump drive capability, it takes three months for a one-way trip from Earth to Prism. Without the twice-a-year supply ship, everyone on Prism will die. The discovery of translithium has guaranteed food and supplies. For now.Jericho Montgomery, heir to the largest Earth conglomerate, arrives on Prism to negotiate for the translithium shipping contract. Jericho plans to secure his future, his father’s respect, and his mother’s legacy by convincing the leaders of  Prism to award the coveted shipping contract to Montgomery Conglomerates.

Seventeen-year-old O’Neill is assigned as his Prismer pilot and leader of his security team. She hates Earthers, but she soon discovers that Jericho is different. Her world is upside-down because her father’s skimmer crashed, and a two-week search has ended with no sign of Jocko Neill’s body.

Cal Reagan, O’Neill’s life-long boyfriend, expects her to marry him, but O’Neill isn’t ready to surrender her independence to him as her protector. He’s never had competition for O’s affection, but now jealousy and his need to protect her from the Earther, bring out traits that force O’Neill away.

And now there’s the annual  Battle…

In P.R.I.S.M. Book Two, Jericho and O’Neill continue their journey while the leaders on Prism know that the Earth corporations won’t maintain the status quo for long. They have been preparing for an inevitable showdown since they landed, almost twenty-six years ago. Without technology and resources, they will have to fight smarter—and dirtier—than the Earthers.

The three disparate groups of first-gen original prisoners and their second-gen children use their fighting skills and their planet to their advantage when mercenaries from Earth arrive to subjugate them, intending to enslave them to work in the translithium mines.

Normally I wouldn’t worry when my dad is overdue from...

My father, Gatfield Montgomery, finally agreed to let me present...